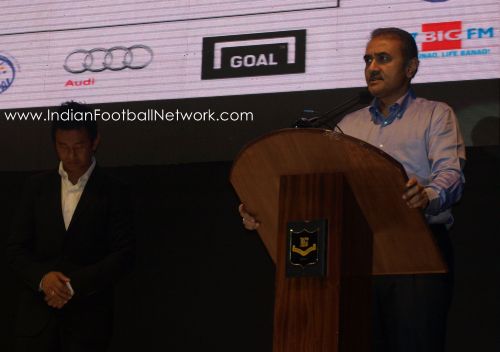 As regards the bid from the Consortium from Kerala, certain clarifications have been sought, post which a decision would be taken.

Queens Park Rangers have given a tentative proposal to participate in the I-League from 2014-15 onwards after fulfilling all the criteria and Standards as required.

The 2013-14 I-League season which will kick-off in August 2013 will be divided as per the Conference Model, the Eastern Conference and Western Conference. The top-four from each Conference would advance to play the final round.

Every Club playing in the I-League will have to abide by the Indian Club Licensing Criteria, the failure of which they would not be allowed to participate in the League.

Each I-League Club would be allowed to register a maximum 30 players out of which a minimum five would be required to be U-23 Players. Minimum two U-23 players need to be in the Final 18 and at least one in the Final Playing XI.

The Committee also set up a deadline for existing I-League Clubs by which the existing Clubs would have to start constructing their own Stadium/refurbish an existing Stadium latest by June 1, 2015, the failure of which the defaulters would be axed from the League.

One Club barring JSW and Mumbai Tigers would be relegated from the 2013-14 edition of the I-League and they would be replaced by a promoted Club from the 2nd Division League.

For the 2013-14 edition of the I-League, the Committee decided to increase the number of Foreign Recruits to four. Every Club would be allowed to register four Foreign Recruits (3+1) and play all of them.

The Second Division League will have a qualifying round and the Clubs would require to pay for their travel and stay. However, the expenses for the Final Phase would be borne by AIFF.

The Club Licensing Criteria would be applicable to the 2nd Division League as well.

Every Club would be allowed to field one Foreign Recruit in the 2nd Division League.

All teams playing in the U-19 Tournament would have to bear the cost of travel and stay for the Regional Rounds. However, the AIFF will bear the expenses for the final phase.

It was decided that there would a Cap of maximum of five teams from any particular City in I-League and 2nd Division put together. The Teams would have to qualify based on the performance in the local Leagues. If additional Teams from Goa and Kolkata qualify in subsequent editions, those particular Teams have to relocate and play in a different venue subject to approval of AIFF/I-League.

Besides, all Clubs participating in any State Association League would be allowed to register and field two Foreign Recruits in a match.

The Committee decided to change the format of the Federation Cup. The next edition will be played on a Home and Away basis on a knock-out system including the semifinals. The Champions will earn the right to host the following edition’s Final match.

The Committee endorsed the idea of creating a database of all registered Football Players in the Country.

It was also unanimously decided to make amendments to the AIFF Constitution as per the Directives of the Ministry of Sports and Youth Affairs in regard to age and tenure.

The Committee felt that a discussion should be initiated with Pailan Group.

Meanwhile, AIFF’s Marketing Partners IMG-R made a presentation regarding the newly proposed League which kicks-off in January 2014.