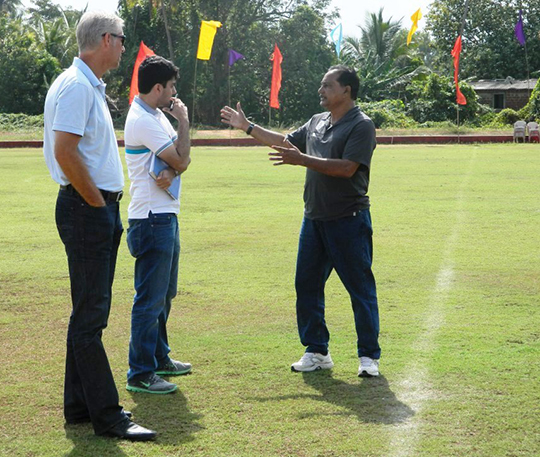 Indian national football team coach Wim Koevermans along with other AIFF officials conducted inspections at Dempo Sports Club and Sporting Club de Goa under the guidelines of the Indian Club Licensing Criteria set up by Asian Football Confederation and FIFA.

It is now mandatory that any club who wishes to participate in the I-League from 2013 onwards must comply with certain criteria as laid down by the AFC/FIFA. Today’s visit was to positively encourage the clubs to follow the professional guidelines.

Mr Armando Colaco, General Secretary of the club, presided over the meeting and welcomed the guests. Inspections began with a tour of the overall infrastructure checking that the players and their training facilities are in good order. The team also checked with the junior players about their nutrition and training schedule. Later a meeting was organised with the junior team coaches wherein they were given some useful tips by Mr. Koevermans.

After a through look at the training facilities at Sangolda, the Inspection team reviewed facilities at the club often advising on maintaining records as per the FIFA guidelines. Later the AIFF officials interacted with Dempo officials and offered specific suggestions tailored to support the Club and help them meet the criteria. They seemed to be satisfied with the policies and procedures followed at the club.

After visiting Salgaocar FC and Churchill Bros SC tomorrow, they will be travelling to Kolkata and North East for their final stage of club inspections.