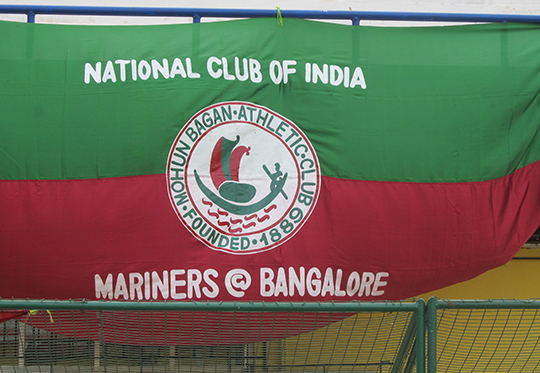 Talking about fans in Indian football, esp., in the I-League, is a tough business. However, even with all its mediocrity, some clubs do have the great fortune of getting some attendance from time to time. But away fans? Well…ummm…sometimes we do see them as well. This is more common for Bengal and North-East clubs, as many people from these regions tend to migrate to other Indian cities, and when their clubs come there they find themselves in the sleepy stadiums.

But travelling away fans!? Sure you’re joking Mr. Das! Well, I can’t deny that I have been surprised, although pleasantly, but this has happened! Before you jump into conclusions and judge this as one of those single events which happens due to divine interventions or when gods are too busy and lose control of the mankind, but no this has happened more than once.

Bengali youths have been spreading out of their homes for long for variety of jobs. Many of them also bring their passions – along with the common stereotypes of Fish curry, Rossogolla, Rabindra Sangeet and Durga Puja, many also bring out their passion for football. Like begets like and thus, these ‘bongs’ clump for ‘adda’ and food sessions, forming many plans of local associations, some of which actually take shape. One of such extreme examples in football was the slightly strange sounding ‘Bengal Mumbai Football Club‘. Enough of beating around the bush, to cut it short, Mohun Bagan fans in Bangalore has been able to form a fan group called ‘[email protected]’. In absence of any Bangalore club in I League 2012-13, they have been desperately associating with any event relating to the club in their vicinity. When Mohun Bagan was temporarily suspended, the members released a video with footballers like Raman Vijayan and RC Prakash’s views on this matter. When 2nd division football in Bangalore featured Mohun Bagan legend Jose Ramirez Barreto (for Bhowanipore club), they went to cheer for him.

Gradually the members expanded their horizon. Goa is an overnight journey from Bangalore, Goa has great clubs and Bengal-Goa rivalry has been the flavor of Indian football in recent times. So, what’s the logical thing to do? Go to Goa, support the Mariners and have a good time. Good idea, but doesn’t seem to materialize as planned, thanks to some really careless management in the stadium. In fact, some may argue,’Intentionally careless’.

The frustrating tale of travelling away fans

[email protected], as we might have guessed by now, are ‘proper’ fans equipped with Mohun Bagan jerseys, bags and a large 15X6 ft flag. And what you do with a flag? Put it out to show your identity and support. In any football stadium that’s NORMAL and if there is a chance of clash between the supporters of the two teams, it is the responsibility of the stadium authorities to have a separate, well protected enclosure for the away fans, irrespective of the numbers. [email protected], while coming for SC Goa vs Mohun Bagan game earlier had a heated argument with stadium authorities. What was them problem? Apparently they asked the MB fans not to display the flag! The arguments and counter-arguments went on for a while and eventually the fans had their way and could keep the flag. And to make the matter worse for the home supporters, Mohun Bagan thrashed their opponents 5-1.

Churchill Brothers vs Mohun Bagan game was a much bigger game than the SCG game. CB required one point to secure the championship and the Alemao family wanted the team to secure the trophy at home, the next match being away from home. Crowds came, Alemao family members came, including the imposing figure of former urban development minister of Goa, Joaquim Alemao himself, and having not learned their lesson those stubborn boys from [email protected] came too. [email protected] came early, and asked the weirdest possible question ever! Are there separate stands for away fans? The organizers, as we might expect laughed it off. What else could have they done when people come up to them and ask such a foolish question!  However, they were considerate enough to allow the flag to be tied and displayed. The MB team practice was going on, the fans went ahead to check them out. As this happened around 20 guys with Churchill Brothers jerseys untied the flag and removed it. [email protected] members tried to stop it and were abused. When they requested the organizers to atleast return them the flag, they were threatened to be removed from the stadium.

Intervention by a player

It’s not difficult to imagine that a chaos was brewing up. The whole incident was happening just behind the Mohun Bagan reserve bench, and one of the former Churchill goalie, Arindam Bhattacharya, who is now with Mohun Bagan, along with team manager Sanjoy Ghosh intervened. The matter was resolved and [email protected] could take their seats (the flag, of course, disappeared in thin air). So, a player actually had to intervene in an dispute between fans and organizers . Such is the state of I-League! People who have illusions about growing professionalism in  I League, please take a note.

Seating with the enemy

[email protected] took their seat. However, given the situation around them, they wisely but unwillingly changed into ‘civilian’ clothes, the Mohun Bagan jerseys going to the darkest  corners of their bags. Churchill Brothers, however, started the game poorly and soon Mohun Bagan took the lead with a brilliant CS Sabeeth goal. While Bhowmick and Dias tried hard to get their team back into the game, the fans left no stones un-turned. Soon a bunch of bullies came towards the [email protected] members and took the adjacent seats, abusing them the whole time. As Churchill scored the equalizer the situation around became even more volatile. The crowd was even more vocal and excited, MB coach Karim Bencherifa was hit by a bottle and for the minority of the away fans the situation was getting tense.

As the match reached towards its last moments, the insecurity drove the [email protected] members to leave the ground before the end of the game. Thus, an overnight journey from Bangalore ended with frustration and humiliation – Losing the flag, running out of the stadium early and more importantly unable to express themselves with a constant fear of the home fans.

Football offers much more dramatic stories of people getting killed, flags burnt, fans beaten up, pitch invasion and what not. Given these standards, the incident is hardly dramatic. However, the significance of such incidents is much more when you consider the bigger picture. Having away fans, that too who are ready to travel is a welcome change in Indian football. Will such incidents encourage such practices? Such incidents would only decrease the  attendances. We already had massive mismanagement of fans in the Kolkata derby this this season, which meant the next derby lost its sheen and attendance figures went rock bottom. Moreover, serious questions on the role of stadium authorities need to be asked. Shouldn’t they have provisions to protect the away fans in case of any emergency. Or should we wait until a serious clash between supporters happen. Goa so far has not experienced some of the ugly fan violence incidents which have marred Kolkata football. However, this doesn’t mean they shouldn’t be ready for that. What one can figure out from these incidents is that the potential for fans violence is there, if there had been more MB fans, things could had been uglier. Football always brings in passion and along with the ill side-effect. Value judgement and moral questioning of fans is useless. Authorities need to prepare themselves for the worst and not wait for something unfortunate to happen before more systematic arrangements are made.

At the moment we hope that I-League brings in more fans in the stadium, which includes both home and away fans and hopefully they can be given a good footballing experience.