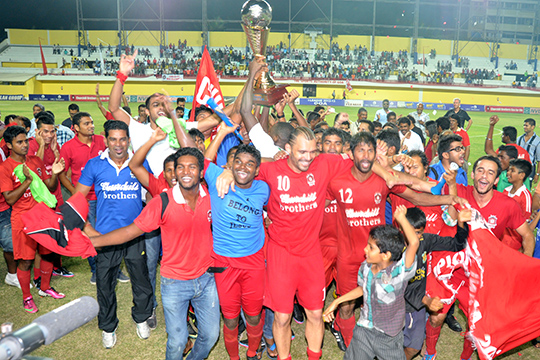 VASCO: Churchill Brothers Sports Club managed a 1-1 draw against Mohun Bagan to emerge I-League champions for the second time at the Tilak Maidan, Vasco, on Tuesday.

The draw took Churchill’s points tally to an insurmountable 52 points with a match in hand. Pune FC is the only team which can have the same number of points but Churchill enjoy a better head-to-head record against Pune FC which made them the champions.

CS Sabeeth had provided Bagan with a super lead inside 17 minutes but India Captain Sunil Chhetri scored the goal that mattered the most.

Churchill Brothers seemed extremely nervous at the start and could not enforce their free-flowing game. With the prospect of winning the title possibly winning the title weighing heavily on their minds, Churchill were hesitant to move forward.

Mohun Bagan, in sharp contrast, were relaxed and dominated the early parts of the match.

Bagan surged ahead in the 27th minute when Quinton Jacobs snatched the ball from Brazilian midfielder Roberto Mendes da Silva and sent a long ball which Sabeeth did well to control, then beat two markers and finish from an acute angle.

It was this goal that silenced the crowd but was in tune with the proceedings on the field. Bagan was the far superior side and it showed till the end of the first half as Churchill Brothers rarely troubled the rival defence.

In the second session, Bagan continued from where they had left. The visitors had a great chance to make it 2-0 and possibly kill Churchill’s resolve but Syed Rahim Nabi, shockingly, shot wide from very close range after Sandip Nandy had barely managed to parry the ball away.

With time running out, Churchill’s Technical Director Subhash Bhowmick introduced Afghanistan striker for Brazilian midfielder Robert. Formations were changed and soon enough, Churchill found the spark they were looking for. Balal, along with Gabon striker Henri Antchouet, created ripples in the rival defence with their speed.

Bagan had survived some nervous moments when defender Celestin Echezona had effected a goalline save to keep out Bineesh Balan’s header. A few minutes later, Balan again went close, this time stopped in his tracks by goalkeeper Shilton Paul.

Bagan, however, could not hang on for long. In the 72nd minute, a cross from the right by Denzil Franco saw Chhetri rise high above the defence to head the goal that sent the crowd into a frenzy. It was a goal that Churchill needed and a goal that got them the point that they had been looking out for.

When the final whistle was blown, the crowd erupted in joy. The team celebrated a famous triumph.