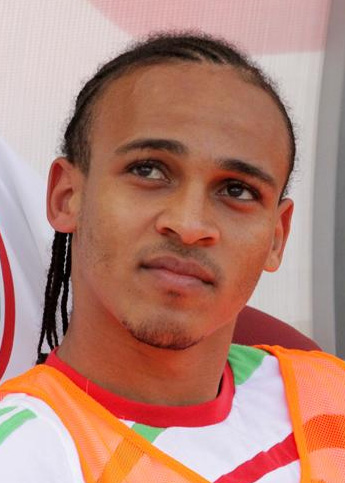 Peter Odemwingie, who captained Nigeria in 2010 Africa Cup of Nations, has gone all out in his official Twitter account to vent his frustrations on the transfer controversies he is having with his current club, West Bromwich Albion.

Odemwingie, who has previously played for teams like Lille OSC and Locomotiv Moscow, is in news in recent times for handing a transfer request to WBA, who in turn has rejected is as ‘he is hugely popular with the Albion fans’ and ‘his contract runs till 2014’. It is also learned that WBA has rejected offers for Odemwingie from a few clubs, including QPR. Odemwingie, who was keen to join QPR had said “At this stage of my career, this opportunity may not come around again. A new challenge, a new opportunity, and a chance to play under the stewardship of one of the most respected managers in the game.”

However, Odemwingie surprised (and amused) football followers when he opened up in Twitter. Below are some of his ‘tweets’. We have not edited any of the tweets, they are as it was updated by him.

I can understand the reaction of few Albion fans on my desire to leave the club.Real reason? Cos they once doubted my commitment. Cantletgo

Want to know why I wanted to quit top flight football last summer earlier than I wished to ? They know at the club.

Odemwingie seemed to be a ‘man possessed’. Even when his agent advised him to stop the Twitter outbursts, Odemwingie, comes up with the following ‘tweet’ –

I am crazy haha adviser text saying don’t tweet, it weakens our position. Doesn’t weaken nothing ! When I want to do something, I Do it.

Six hours after his initial burst of tweets, he started again with even more tweets, some more incoherent than others. One wonders, whether he was completely in control of what he was saying.

Professional way or unprofessional ? I do both. Doesn’t change much. If anyone will lose it will be me. Sometimes one doesn’t work. So pls

If you don’t want to know what’s in my head why follow me then ? Unfollow please. Score u the best.Don’t score – u bad. Where is the truth?

Damage to my image was done. Few fans went cold on me. Thanks God almighty for the unforgettable hat trick !!!

enough for today. Let me go and poor a Guinness into my system. Home alone today so could tweet. Home alone- like that naughty boy in film

Loyalty left 70 percent . the rest they stole out of my pocket thinking I was keeping money in there. Good night

We ll start innocent in football and end up different when cheated and the rest.

Players always bad cos they going against crowd. Storm in a tea cup. Nonsense