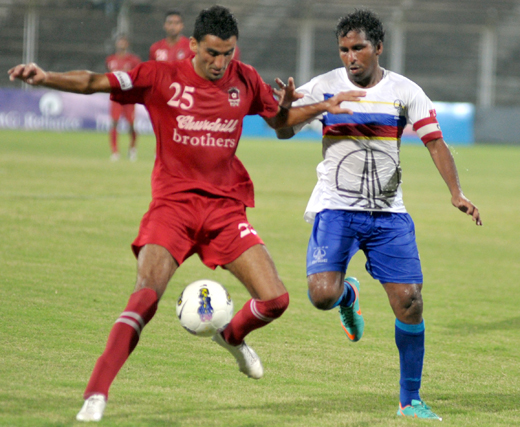 MARGAO: Churchill Brothers Sports Club tore into ONGC with a 5-0 demolition in a second round I League clash at the Nehru Stadium, Fatorda, on Thursday (October 11).

Churchill Brothers suffered a setback in the opening match where, despite dominating, they still ended 1-2 losers against defending champions. But on Thursday, the favourites lived up to their top billing as Lebanese striker Akram Moghrabi scored a hat-trick that left the visitors bleeding.

Churchill were favoured to win this clash but nobody expected them to win so easily especially against a team that had caused considerable problems to Pune FC in their opening match.

Akram was the hero of the match right from the start as he opened the scoring in the 17th minute Steven Dias’ short corner saw the Lebanon striker leap impressively to head the ball past the ONGC goalkeeper.

Roberto made it 2-0 when he converted a rebound after the ONGC goalkeeper had managed to keep out Akram’s header from close range.

Akram got his second and the team’s third goal just two minutes later when Steven Dias turned provider once again from a corner kick.

Any thoughts that Churchill Brothers would take their foot off the accelerator were wiped away when Bilal added his name to the scoresheet, this time Roberto turning the provider with a measured ball.

Akram himself completed his hat-trick and capped a fine evening when he scored a stunning shot. The Lebanon striker collected a ball from just outside the box and ended with a long ranger that dipped viciously into the far corner of the nets.