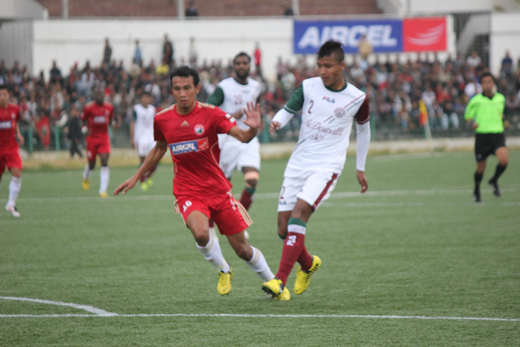 It was indeed a match which was worthy of  the I-league opener –status  of the most gigantic proportions. The script could not have been better written, and the end result was of course the icing on the cake for the home fans.

As the 6th October dawned  upon the pine city, the city’s beloved football team, Shillong Lajong Football  Club was preparing for what was probably one of their  most tough I-League opening matches. Facing an uphill task  against  Kolkatan giants Mohun Bagan, the Reds knew that they would have to play out of their skins to walk out of the encounter, unscathed and unbound.

The home crowd, on their part, knew that to rally behind their team and to take it past the finishing line, they would have to be one: they would have to be “Together and United”. And both the city and the Club kept their word , as they once again prepared to dance together to the tune of the “Beautiful” game.

At exactly 2:45 pm on a cloudy day at the J N Stadium, Shillong, the referee signaled the start of what would be an adrenaline strewn slug-fest between the Giant killers and the Giants.  The atmosphere was electric , the mood upbeat and the game poised, as the drummers slowly started to keep the near capacity stadium swaying away to their beats. On the ground, the game took off on a shaky and cautioned start, as both the teams jabbed and tested the waters. As the game wore on ,the shots started coming from both teams, as the crowd started to sense a deadlock-broker. But some excellent  goal keeping from Lalthunmawia Ralte of Shillong Lajong and Arindam Bhattarcharya of Mohun Bagan ensured that the first half of the game would end goalless.

The already high-voltage status of the match was upped in the second half as the crowd started to get more vociferous and vocal behind the local team, as they started sensing that this time around around, a new chapter would be written  in the local football lore. Shillong Lajong saw more of the ball and created better chances as the missed opportunities went a-begging time and again for the home side. The Mariners too had a couple of  near misses  when key man Odafa Okolie and Tolgay Ozbey came close on a couple of occasions, with Mawia once again playing spoilsport to the Bagan forwards. The second half also saw Shillong lajong using all of their substitutions, with Eugeneson Lyngdoh coming off for Boithang Haokip, skipper Rennedy Singh coming off for Samuel Shadap and P C Lalhimthara replacing Sushil Singh.

As on previous occasions, just when the team needed him the most , Boithang Haokip made it count yet again , lifting the team and the thousands who had flocked to the stadium. It all transpired in the 63rd minute, when Haokip latched on to a rebound  to blazed the ball past a hapless  Arindam,and a bevy of Bagan defenders. The roar of the crowd was humongous, as they all rose up from their seats and one could swore that the noise could be heard from miles across the city . Haokip had did it again, recreating the magic which only he himself knew to conjure. Hearts racing ,the crowd watched with bated breath as Bagan started to inject new life into its play to find the equaliser. That brought the game to a new level as both teams started  looking to counter each other’s attack. And just when it seemed that the match would be heading for a breath-taking, almost surreal climax,as the clock ticked past the 90 minute mark,-former Mohun Bagan player Lalramluaha put the game beyond  doubt when he buried the ball deep into the Bagan net, turning one defender and curling his shot past the Bagan keeper. The crowd  was almost delirious, for they knew that the day had been won, without a shadow of a doubt ,as Shillong lajong wrapped up their first I-League match with a huge morale boosting win against the Mariners.

Both the coaches of the teams agreed that it was an evenly contested encounter, and Shillong Lajong coach Desmond Bulpin summed it all up when he said that the “Voice” of the crowd was the defining factor of the day, and also remarked that it was great to see the combination of the senior and the youth players coming all  together, when it mattered the most.

Redemption was complete and the story re-written –It would be yet another day in Shillong that a Giant has been fallen by the Reds, and for tonight ,the city will be bathed  and united in Red.