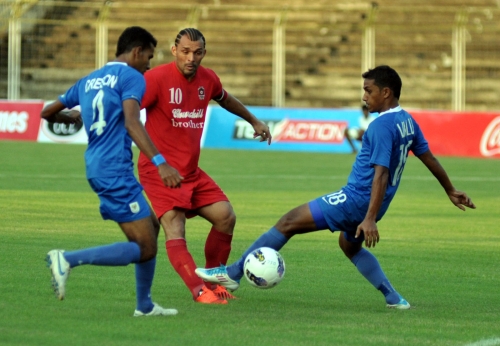 MARGAO: Ryuji Sueoka scored a brace of goals as Dempo Sports Club laboured to a 2-1 win over Churchill Brothers Sports Club in the opening match of the I-League at the Nehru Stadium, Fatorda, on Saturday (October 6).

The Japanese striker had provided Dempo with a second lead, but when Brazilian striker Roberto Mendes da Silva restored parity for Churchill a minute after resumption, Sueoka was at it again, as he scored a stunning goal in the 74th minute.

For most part, Dempo did not look like the threatening side that they used to be. Churchill Brothers had a measure of them and, infact, dominated for long spells with controlled possession. But, when it came to providing the cutting edge upfront, Dempo did not falter.

Dempo surged ahead in the second minute itself as Sueoka got on to the right side of a pass from Clifford Miranda. Churchill goalkeeper Sandip Nandy should have done better in that situation but instead he could only watch helplessly.

Churchill regrouped sooner than one would have expected but in the first 45 minutes, they did not taste any success. Beto went close with two brilliant headers while Steven Dias also missed from a fairly comfortable range.

In-between, Dempo had time to launch a counter attack but the resultant attempt from Anthony Pereira struck the crossbar.

In the second session, Churchill got the rewards for their spirited efforts. Tomba Singh’s long ranger was parried away by Dempo goalkeeper Subhashish Roy Chowdhury but Beto had, by then, done well to follow up and give his team the equalizer with a simple tap.

Churchill had done well to deny Dempo the ball but the defending champions had the last laugh when Sueoka fended off challenge from Denzil Franco and D Ravanan to stretch full length and give finishing touches to a measured cross from Anthony.

Dempo could have had another goal at the fag end but Sandip Nandy did well to deny Anthony and Joaquim Abranches in quick succession.