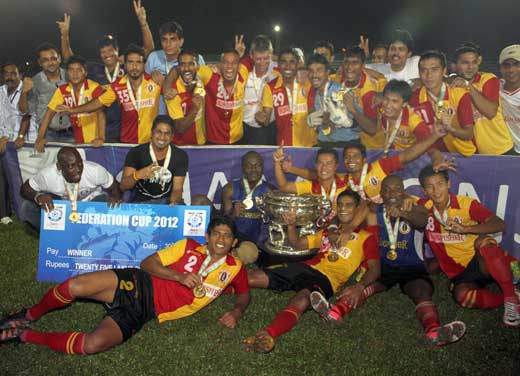 SILIGURI: East Bengal rediscovered their touch in the extra-time to down Dempo SC 3-2 and reclaimed the Federation Cup title that it had lost year ago, in front of a partisan crowd of around 35,000 at Siliguri’s Kanchanjungha Stadium. This was the eighth title for East Bengal which they won in 16 appearances in the final.

East Bengal dominated from the start but failed to convert the advantage into goals as Dempo put a defensive dragnet around the crowd favourite. Dempo scored the lead off Climax Lawrence before East Bengal recovered the deficit to force a 1-1 deadlock in the first 90 minutes of regulation time. Arnab Mondal scored the leveller for East Bengal. This forced the action into extra-time where East Bengal produced their best attacking game to end Dempo’s resistance. The win came as a welcome gift to the Kolkata giant’s British coach Trevor James Morgan, who turned 56 today.

The two halves of the regulation time were more about retention where both the opponents aimed more at containing each other. East Bengal earned more scoring opportunities but failed to finish the goalward moves except for Arnab’s goal, which the East Bengal central defender scored off a header from a Mehtab Hossain freekick. Dempo worked up the lead of a counter-attack when the East Bengal defender Saumik Dey produced a feeble clearance, which was reached Climax Lawrence. The Dempo central midfielder collected the ball inside the East Bengal box and found the net with powerful half-volley.

East Bengal pressed on the accelerator in the extra-time introducing its super-sub Lalrindika Ralte in the 91st minute. The young wing-half created added pace to the team’s attack and set off a through-pass for Orji Penn, but the latter’s hesitation inside the Dempo box spoiled the chance. Ralte, who scored the East Bengal winner in the semifinal against Churchill Brothers, fired a powerful grounder in the 99th that came off the Dempo goalkeeper Subhasish Roy Chowdhury. East Bengal Manandeep Singh tapped the rebound home to give East Bengal the lead.

Keeping up the thrust East Bengal made it 3-1 in the 109th minute, when Chidi scored from a solo effort getting a long ball from Manandeep. Dempo kept the action alive and reduced the margin off a header from Mahesh Gawli in the 113th minute but its search for the equaliser remained unrealised.