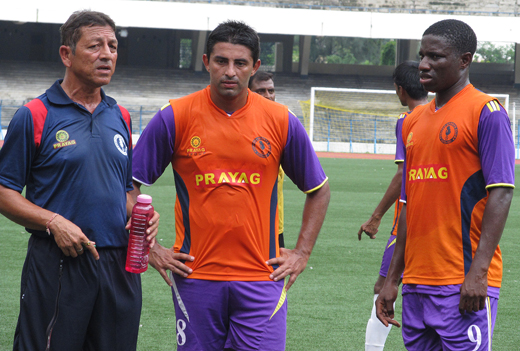 “People are capable, at any time in their lives, of doing what they dream of.” This inspirational line from Paulo Coelho’s bestseller ‘The Alchemist’ sits perfectly on Prayag United SC. From a toddler languishing in the fifth division of the Kolkata Football League during the mid-nineties to a big spending top-tier club in 2012, the journey spanning almost 18 years has been nothing short of spectacular.

“The credit goes to the General Secretary Mr. Alokesh Kundu. He lived a dream. He built the team from scratch and now it’s worth almost Rs. 17 crore,” former India International Aloke Mukherjee, who was also coach of United SC in 2004-05 season, told www.the-aiff.com. “He used to withdraw money from his PF for the welfare of the club,” he added. “In 2004 we beat the Big-three — Mohun Bagan, East Bengal and Mohammedan Sporting in the Kolkata League. We earned a name for ourselves as the fourth biggest force in Kolkata Maidan. We had the belief and boys like Lal (Lalkamal Bhowmick), Anupam (Sarkar), Snehashish (Chakraborty) rose to the occasion.”

United SC took their first giant step towards the big league in 2007-08. Anjan Nath, who has been with the club for all these 18 years and is now head coach Sanjoy Sen’s deputy, chronicles the epoch making sojourn. “We were in Pune for 20 odd days. It was the second phase of qualification for I-League. There was Vasco SC, HAL, Pune FC and others and eventually, we qualified for the I-League,” Nath recollects. Senior pro Lalkamal Bhowmick also takes a walk down memory lane. “I have a special place for this club in my heart. The one thing that has never changed about Prayag is the belief and confidence. I think our X-factor is the great rapport between officials and players and the zeal to beat all odds and do well. When we lose a match the officials don’t put pressure on us.”

Since qualifying for the I-League in 2008-09 season, there has been no looking back for the Kolkata based club. The men in purple went on to win the Durand Cup in 2010 under Subrata Bhattacharya. Their consistency came to the fore in 2011 under incumbent Sanjoy Sen. United SC finished runners’ up in both the IFA shield as well the Durand Cup. They were also Federation Cup semifinalists that year. “We lost in tie breakers in the IFA Shield final and Durand Cup final. The only disappointment last season was that our trophy cabinet remained empty. A club is built on trophies and we are no different,” Sanjoy Sen quipped.

In 2012, Prayag have one of the best squads on paper with the likes of World Cupper Carlos Hernandez and Ranty Martins. “We have a star player in virtually every position. We have Subrata (Pal) and Sangram (Mukherjee) while Gouramangi (Singh) and Bello (Rassaq) will be manning the defense,” Lalkamal comments. “We have a lot of new players in our side. They need time to adjust and we have to patient,” Sen quips. The upsurge has been an unique story in Indian football. A major Trophy this season will be the icing on the cake for them. Prayag take on defending champions Salgaocar SC in their first match on Thursday (September 20).