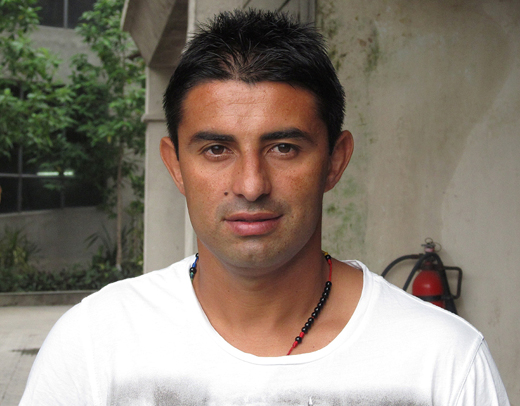 The face of Indian Football is fast changing. Costa Rican World Cupper Carlos Hernandez stays evidence of it. Costa Rica’s most famous player at the moment and someone who played in the 2006 World Cup, the 30-year old will be seen in action donning the Prayag United jersey this season. In an exclusive interview with www.the-aiff.com, Hernandez, a former Melbourne Victory player spoke on the task ahead, his brush with Indian Football, his experiences with Gouramangi Singh, Subrata Pal and much more. EXCERPTS:

You have played in the World Cup for Costa Rica! You have also played Club football in A-League for Melbourne Victory. What prompted you to come to India?

Yeah, I did play for Costa Rica in the World Cup. I want to share my experience in India. The standard of Indian football is good enough and is on the rise. If I can play a role in it, I would feel privileged.

Obviously, it would be unfair to compare Australian football with Indian football. A-League is of the highest level and Australian football is at par with World Football at the moment. But at the same time, let me tell you, it didn’t happen in a day. India are taking a step in the right direction and the future stays bright. I can say all that with my experience from what I have witnessed.

How are you adapting yourself to the Indian conditions?

I’m not having any problem as such in adjusting except, perhaps playing on the synthetic turf. I have not played or practiced on an artificial turf in the last 7-8 years. But I have no complaints and am happy the manner things are shaping up. I want to score as many goals as possible for my club.

Define your role in Prayag United.

You can say, I have a dual role. My primary role stays to lend stability in the middle while the other one, as I said, is to share my experience with the boys.

Did you watch the Nehru Cup?

Unfortunately, I didn’t get the chance to watch the tournament. The result, nevertheless, stays very encouraging. Two players — Gouramangi Singh and Subrata Pal — are my colleagues in Prayag United and we share a good rapport. Both are confident and quality players and are real assets for the team. In fact, they will be assets in any team they play.

How are you preparing for your first big assignment in India – the Federation Cup?

I haven’t had the chance to watch any I-League team so far as I’ve played only against local clubs. I understand the Federation Cup stays the second most important tournament after I-League. Our team is preparing well and the boys are working very hard. We will fight for the Championship for sure.

What about your partnership with Ranty Martins?

Ranty Martins is a great player. We stay in the same apartment and are good friends, both on and off the field. Ranty is helping me a lot to understand the structure of Indian football. I hope by the end of the year we will make the best pair.

As a player have you set yourself any specific targets?

I would want to grow as a footballer no matter wherever I am. India is a vast country and has a rich culture. My target stays to learn about the culture and give my best for my club. People are very passionate about football in Kolkata and that has bowled me over. People have respected my family and the food habits are quite similar. So, it’s a kind of a ‘home away from home’ for me.

There’s hype around World Cupper Carlos Hernandez. Does it bother you?

Hype is a part of every sport but I don’t feel there’s any hype surrounding me. In fact, I’m not bothered. I don’t enjoy staying in the limelight. The job of a footballer is to perform on the field.