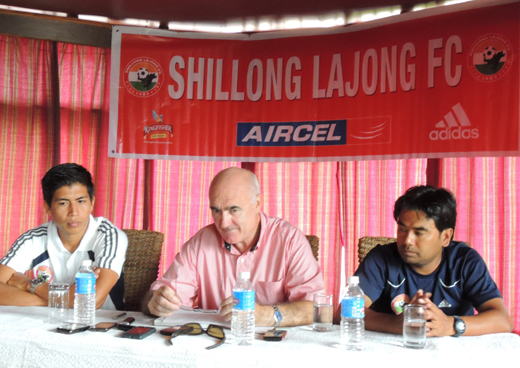 Shillong Lajong Football Club will be departing on Sunday for the Federation Cup football tournament which will kick off in Jamshedpur on the 19th of September 2012.

The I-League club from the North East, Shillong Lajong FC, has been grouped with clubs like, Mumbai FC, Pailan Arrows and Champions of the I-League 2011-12 season, Dempo SC. In a press conference that was held at Hotel Centre Point on Friday, SLFC Head Coach, Desmond Bulpin said that it is important to stay positive and there is no problem playing against the champions, Dempo or going up against Pailan Arrows or facing Mumbai FC. “It is a good draw”, he added.

We go in the tournament to win it and all the other teams will try to win it too. But the most important thing is that the boys should give their 100 percent. Dempo, East Bengal and Prayag United are surely the teams to watch out in the Federation Cup. It is not going to be an easy game but we have to be positive and continue to be committed towards the game.

The head coach of SLFC also said that it is important to promote the North East because there is so much of talent in this part of the region, for instance the Shillong Chamber Choir or Somdev, the tennis player from Tripura, Boxing living legend, Mary Kom and many more. Hence, selecting Renedy Singh to be the captain of Lajong is mainly because of his many years of hard work and experience and also, all the boys in the team look up to him as their elder brother.

“I would like to thank the fans for their kind comments on the Shillong Lajong FC Facebook Page and the club is looking forward to the first I-League home game which according to the tentative I-League fixture, is against Kolkata giants Mohun Bagan and we are hoping that the red army comes to our home ground to support and stand behind us, win or lose.”

Captain of Shillong Lajong FC, Renedy Singh, who was suffering from injuries, is expected to make a comeback in the Federation Cup and said that the coaching staff has been helping him a lot and he is doing much better than before, and is almost out of injuries.

He further added by saying that the coaching and the training is very organised now and the team had a good start for this season by winning the North East Super Series, against A-League side Wellington Phoenix FC. “I have been playing football for a very long time and I feel that no club in India could have won a match against Wellington Phoenix FC and Shillong Lajong is the first club in India to achieve such a massive feat.  We need to continue the pressing game and if the team continues to play in the same manner, then we can beat any top team in the Federation Cup or even the I-League.”