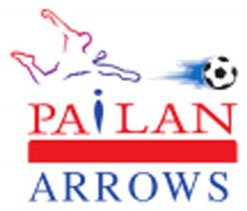 The Indian developmental squad and I League’s only all Indian, u23 team, had a poor I League season, securing only two wins in the I League, the first coming only in their 24th game. They finished 13th and survived relegation only because AIFF made Arrows immune to relegation, in order to keep them afloat in the country’s most competitive football league.

Arrows had a decent last season, they finished 9th with 7 wins. More importantly they produced many players who were selected in the Indian team – Raju Gaikwad, Jeje Lalpekhlua, Lalrindika Ralte, Gurpreet Singh Sandhu, Manandeep Singh, Jewel Raja, Shilton D’Silva are some of such players. Thus, at the start of this season, much was expected from Arrows, but, they failed to deliver. However, Arrows did made a comeback in the last phase of the season, too late to climb the league table, but nevertheless, a comeback is a comeback.

In my opinion the improvement seen in Arrows has been due to change of tactics and in this article I will put forward my views on the tactical changes seen in Arrows during the last phase of the season.

Arrows started the season under Technical Director, Sukhwinder Singh, who used a conventional 4-4-2 formation, with a defensive mind set. His tactics saw Arrows forming a strong defense, with long clearance aimed for the attacking players to latch on to and try to surprise the opposition on counter. Unfortunately, the lack of firepower upfront and a creative attacking midfielder meant that the tactics was unsuitable for the team.

After 17 I league matches, Arrows were without a win, accumulating 8 points and scoring only 8 goals. During this time, Sukhwinder Singh resigned and the existing Arrows staff of Sujit Chakaborty, Tanumoy Basu and later Narayan Menon took over the Arrows boys. Rob Baan himself, instructed the coaches and brought the massively talented George Alwyn from TFA to the Arrows squad.

After this Arrows played 9 I League games and 3 IFA shield games. They won 3 matches, scoring 15 goals. They did experiment a bit with tactics and formation. I would discuss the most successful tactical changes based on two matches – Churchill Brothers (Home) and HAL (Away).

Arrows changed altered their 4-4-2 formation to what can be described as 4-1-2-1-2, which sometimes looked very similar 4-1-4-1 and 4-2-3-1 depending on the situation. This formation used CS Sabeeth as a lone striker (Targetman) who tried to distract the opposition central defenders or tapped in the crosses. They used two attacking wingers, but there was an asymmetry in the attack. The left winger, usually Ajay Singh or Malswamfela, would take more attacking responsibilities and frequently assumed the role of a supporting forward, but they also took lot of work load as they frequently tracked back to support midfield and sometimes even defence. Because the left wingers tracked back to do defensive duties, the left fullback Shouvik Ghosh had been given a defensive role, where he would hardly go up and frequently move into the position of central defence when the right wing back, Avinabo Bag, takes an attacking role.  The epicenter for most attack was by George Alwyn who was given much less defensive duties and had some degree of free role, he would provide passes to the targetman, dribble past defenders to bomb into the box, reminding of the elegant trequartista position. Since, the wingers in left were more attacking, the right side was balanced by overlapping runs by Avinabo Bag, who would combine with the other central midfielders. In central midfield, Bikramjit Singh Sr. was given a full time defensive duty, ahead of him were two midfielders who would take a lot of work load in both helping the attack by combining with Alwyn and the wingers and they would also come back to have defensive duties. The players in these positions were mainly Tirthankar Sarkar and Pronay Halder. Prabir Das has also been used but he is more competent in attack rather than defence.

The tactical changes brought modest success to the Arrows camp and built the player’s confidences. Apart from the wins against HAL and Chirag Kerala, they had given solid performances against Pune FC, Churchill Brothers and Prayag United. It helped in breaking the myth that the current Arrows players were of poor quality. It is of no surprise that a lot of senior Arrows players (who would be released as they turn 23+) are getting contracts from top clubs like Mohun Bagan, Churchill Brothers etc. Apart from that it again shows the importance of correct tactics based on available players in football. Lastly, the coaching staff of Arrows clearly deserves kudos for implementing these tactics successfully in a very short time.