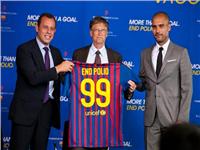 WASHINGTON, DC, July 28 – Fútbol Club (FC) Barcelona, FC Barcelona Foundation, and the Bill & Melinda Gates Foundation kicked off a three-year partnership today to energize the global fight to end polio and draw attention to the promise of life-saving vaccines. Bill Gates, co-chair of the Bill & Melinda Gates Foundation, along with FC Barcelona President Sandro Rosell and Manager Josep Guardiola, announced the partnership at the Newseum in Washington, DC. They were joined by players Andres Iniesta and Seydou Keita

The first year of the partnership will focus on polio eradication. Polio has been reduced globally by 99 percent and is one of the best examples of the value of life-saving vaccines. The disease once crippled children worldwide, but there are now just four countries— Nigeria, India, Pakistan, and Afghanistan—where polio transmission has never been stopped.

“We have the chance to score a big win against polio, but we need loud and passionate voices to join the fight,” said Gates. “FC Barcelona’s commitment to using sport for social good will help us rally support for vaccines and end polio once and for all.”

FC Barcelona – with 18 million Facebook fans and multiple Twitter channels with millions of followers – will engage its followers through social media. In-stadium advertisements and announcements during matches will highlight the tremendous opportunity the world has to end polio and save millions of lives through childhood vaccination. Fans will be encouraged to join the team in the effort to eradicate only the second disease in history. The partnership will use the tagline “More than a Goal. End Polio,” a play on FC Barcelona’s tagline, “More than a Club.”

“Sport is an effective way to reach children and youth, and we have found that it can be used to benefit the health of people worldwide,” said Rosell. “Our partnership with the Gates Foundation underscores our long-standing commitment to making the world a better place.”

The partnership allows the Gates Foundation to use images and video of the FC Barcelona team to support awareness efforts. The two parties will use their own financial resources to fund marketing and promotional activities and will not be compensated for their partnership efforts.

FC Barcelona is widely known as the most socially committed club in the world, transmitting on-the-field excellence to off-the-field social projects. It uses the power of sports to reach children and youth with messages about health. It has been committed to social issues for more than 100 years, working with numerous partners to help improve the lives of children worldwide. For example, FC Barcelona provides 0.7% of its revenue to its foundation and has a global alliance with UNICEF.

FC Barcelona is widely known as the most socially committed club in the world,transmitting on-the-field excellence to off-the-field social projects. It uses the power of sports to reach children and youth with messages about health. It has been committed to social issues for more than 100 years, working with numerous partners to help improve the lives of children worldwide. For example, FC Barcelona provides 0.7% of its revenue to its foundation and has a global alliance with UNICEF.

More Than a Goal on You Tube

Fútbol Club Barcelona is a football club founded in 1899 by Joan Gamper. In its 100 years of history, Barça has become “Mes que un club” both in the Catalan society and all over the world. Barça approaches the world from its sporting and social excellence, its catalanity and international projection, being a global reference for millions of fans.

The foundation’s mission is to promote a social model by developing support, educational and cultural initiatives (alone and in collaboration with the UN) that allow the consolidation of Barça’s social commitment as “more than a club” in Catalonia, Spain and the world.

Since 1988, more than 20 million volunteers have supported the Global Polio Eradication Initiative in its goal to end polio worldwide. The Global Polio Eradication Initiative is a public-private partnership led by national governments and spearheaded by the World Health Organization (WHO), Rotary International, UNICEF, and the US Centers for Disease Control and Prevention (CDC).

Guided by the belief that every life has equal value, the Bill & Melinda Gates Foundation works to help all people lead healthy, productive lives. In developing countries, it focuses on improving people’s health and giving them the chance to lift themselves out of hunger and extreme poverty. In the United States, it seeks to ensure that all people—especially those with the fewest resources—have access to the opportunities they need to succeed in school and life. Based in Seattle, Washington, the foundation is led by CEO Jeff Raikes and Co-chair William H. Gates Sr., under the direction of Bill and Melinda Gates and Warren Buffett.