In India, sports is synonym to Cricket and only Cricket. Yesterday if you noticed, we did face a certain glimpse of the same. India XI playing against Somerset, a small non-metropolitan county in the United Kingdom and thanks to Suresh Raina we were saved from hard-hitting disappointment. Well this ordinary story was covered as an important story in the sports section of the tabloid. Nonetheless, at the same time India did achieve something bigger and better. 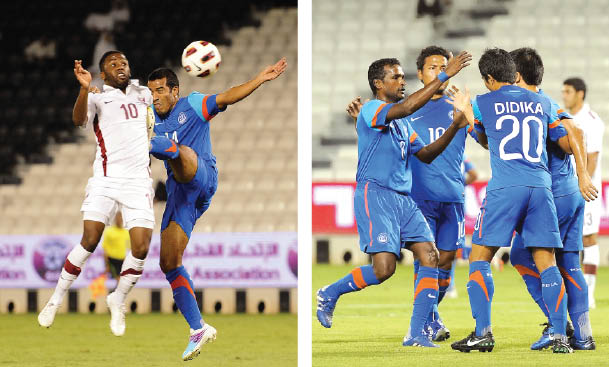 Yes, i am talking about Indian soccer team beating Qatar in Doha. Being currently ranked 147 in the FIFA Football Rankings, beating a  side which is more than 50 ranks above is an achievement in itself. Indian media does talk about the criticism, corruption and the incapability of AIFF, but to galvanize the evils of Indian football is totally absent in them. A small column in some corner is not what this story deserved!

We Indians, especially football fanatics blame the lack of football infrastructure present, but how many of us did change our Facebook status from ‘I am so bored sitting at home’ to ‘India Beat Qatar in Soccer, Proud to be an Indian’?  The answer is ‘Dimunitive Audience’. We often do share stuff on the internet through personal medium about Manchester, Real Madrid, Cristiano Ronaldo or Messi but how many of us did share the supercilious story of Indian victory.

Suresh Raina and some Indian batsmen playing sublime was all over the net, but Sunil Chetri who is also an Indian Soccer Fame and Muhammed Razzak couldn’t manage to even get an important article on the media platform. Let’s not blame everything on the government, let’s keep ourselves responsible for our own actions too. This is just a brief of the entire scenario. Is there anyone who really applauded the lads and gave them motivation to do well in their future games? We want them to do well in FIFA World Rankings, want them to win in Asia and book a spot in the upcoming FIFA World Cup, what steps as Indians are we taking towards them to reach our Goal? Zilch!

To all those readers let me ask you this question, What is it we are lacking? Is it the Indian infrastructure or the Indian support towards football?