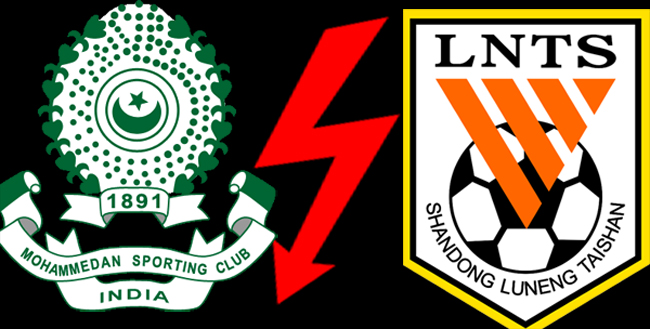 One of the oldest Indian clubs, Mohammedan Sporting Club, who are currently a second division league team have shocked top Chinese club Shandong FC, when they edged past them 1-0. The scoreline clearly doesn’t reveal the true nature of the match, where both the teams created plethora of chances, with both the teams hitting the woodwork in one occasion. However, the only goal of the match came as late as 85th minutes when Mohammedan SC’s Nigerian recruit Cristopher scored after beating two Chinese defenders.
The match started in an attacking mode when within 5 minutes, both teams tried their luck. However, in the initial minutes Mohammedan SC’s players looked nervy, letting the Chinese team to create more chances. But Mohammedan SC’s goalie was in top form, keeping many Chinese attacks at bay.

In the 16th minutes the post denied Shandong FC a goal. Within a few minutes, Manas brilliantly saved a close ranger. One of the top performers for Mohammedan SC was their new Korean recruit Han Wook. Wook’s work rate had been top. His ability to take long rangers was also threatening for the Chinese team. He almost scored in the 37th minute when his 20 yarder hit the post. Although, Mohammedan SC had their chances, the Chinese team was more dominant till the half time.
Whatever the Nigerian coach of Mohammedan SC, Tope Fuja, had said in the half time break worked, because his team looked more calm and composed in the second half. They played a few clever short passes and went in for more and more attacks. At the beginning of the second half, Fuja introduced youngster Kartick Kisku in place of veteran Dibyendu Biswas. This move turned out to be a masterstroke as Kisku had a good game. The game started to change more in favour of the Kolkata club.

In 52nd minutes Cristopher missed an open net from Satyajit Bose’s pass. In 70th minute, Kisku’s shot was saved by the Chinese goalie. In 82nd minute, Wook’s shot was fended off. The away team also had a few chances in between but could not utilize it properly. The decisive goal came in 85th minute when Nilendra Dewan, who came in the field for Satyajit just few minutes ago, took a ball from the right and passed it to Christopher, who showed brilliant skills to overcome two defenders and shot at the goal. The match ended with Shandong FC player heading a free kick wide of goal in the injury time. Wook deservingly got the man of the match.
The Mohammedan SC supporters will be relieved that their once-glorious-but-now-struggling club has assembled a decent and balanced team having few veterans and youngsters at the same time. Their foreign recruits, Christopher and Wook also looked promising. Coach Tope Fuja’s tactical changes in the second half were one of the reasons of their success and the fans will be hoping for more of the same in remaining IFA Shield matches and more importantly in the second division league matches next month.

However, questions will be asked about the utility of bringing a foreign team which although are a big and successful club has brought a team of poor standards. This Chinese team boasts having an assemblage of big players, but none of the first team members or even the 1st team bench players were brought in. IFA needs to ensure that they bring good foreign teams who are willing to bring atleast few of their good players, otherwise this kind of displays neither will provide entertaining football nor will provide any kind of special attraction for fans like it used to be earlier when teams like Pas Club (Iran), Ararat Erevan (USSR), Penarol FC (Uruguay), Shakhtar Donetsk (USSR), Bayern Munich Reserves (Germany), Palmeiras ‘B’ (Brazil) used to play for the shield.

It would be interesting to see how Shandong FC does against East Bengal in their next fixture.