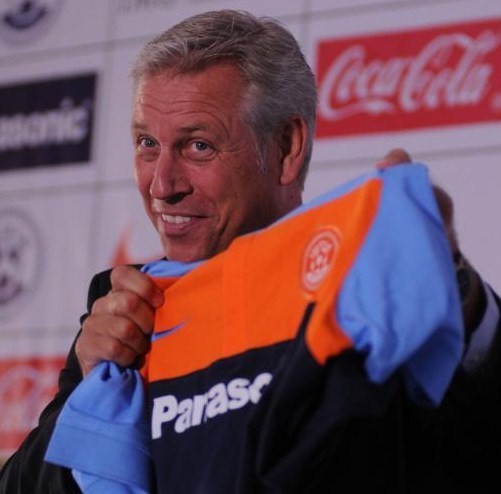 Indian football team coach Win Neverman has decided that the team should train on the moon in zero gravity to get optimum performances and achieve some good results in the upcoming Asian Games.

The second match of the Indo-Pak friendly series saw India touch a new low under Win Neverman as it is for the for the first time in 55 years that Pakistan has defeated India on Indian soil, not counting Cricket of course.

According to Win, the preceding European tour did not obviously help in improving the performance of the team as friendly football teams like Pakistan are also not sparing us. India has already achieved the distinction of losing against teams like Nepal, Mayanmar and Afghanistan under Win BTW.

India was supposed to travel to China next but the plan has been cancelled and replaced with the lunar tour. Asked about the logic behind such a decision, Neverman said,

“The team lacks the speed and athleticism needed for modern Dutch style football, zero gravity of moon will help the players move faster and jump higher. The oxygen free environment will increase the stamina.”

A fellow frustrated journalist reminded Win that the Asian Games is not happening on the moon, but he brushed aside the concern.

Win is being criticized for not selecting some U19 players who have seemingly performed better and have better technical abilities. But Mr. Neverman’s argument to this end is infallible.

“There is no point in training those who are good already. Do not worry about the defeats, that is a learning process. After all, ‘results are not important’ is our official excuse!”