As we are inching closer to the much-awaiting inaugural season of Indian Super League, it’s time to set our sight on some promising faces of the game who do not belong from our country but will be in tandem to stand besides the likes of Barreto and Ranty.

The 33 year old Danish striker is a clear threat in front of the goal. He recently showed his ability by netting four in Delhi Dynamos’ friendly against a local club. Nonetheless, he has scored 149 times in his professional club career and his only International goal came against Germany in 2010. His national team debut came when he replaced former Arsenal star Nicklas Bendtner in 67th minute in a friendly against Poland. 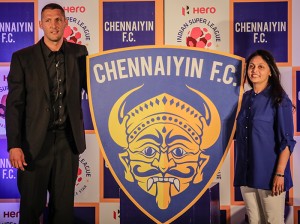 The young Brazilian sensation from Atletico Paranaense was an intelligent buy from the newest ISL franchise. The attacking midfielder from Brazilian World cup winning star Kleberson’s former club is known for his intrinsic skills and penetrating ability. As we have seen a lot of Brazilians getting a taste of success here in India, it can be safely assumed that the name ‘Bruno de Lima’ is soon going to be in the cheers of Chennai fans.

The left winger from Spain is a youth product from the famed La Masia academy of FC Barcelona. Though he was not lucky enough to accumulate a size-able number of Barca senior team appearances, he was prolific when he helped his side Levante to get promoted in La Liga.

In a recent friendly against Gimnástica Segoviana Club de Fútbol in Spain, he scored in his side’s 5-0 comfortable victory. His pace and dribbling skill may prove to be tricky for defenders as he is going to be a big name if the Kolkata franchise goes on to make a successful campaign.

Manchester United has still fresh memories from their humiliating defeat against Leicester City and here we are about to talk of a former no. 7 of the Foxes who can play both as a striker and a winger. The Scotland-born Canadian international is going to be a regular name in Trevor Morgan’s team-sheet. His career tally of 109 goals reveal his scoring capability and he is expected to leave a mark in India.

Off-topic: He suffered a fatal injury causing fractured skull and internal bleeding while playing for Barnsley against Sheffield United.

The 29 year old Czech midfielder has proven ability to score crucial goals from outside the 18 yard box. He played three seasons for the famous Czech club Bohemians 1905. Alongside Ljungberg and Rahim Nabi, he will be effective to deliver the ball into strikers’ toes.

A striker with a vast English Premier League experience will not be less effective than Kerala’s Michael Chopra. The Portsmouth academy product made his debut in EPL under present QPR manager Harry Redknapp. He is also Swedish Club Elfsborg’s top European scorer in history. Looking at his records, he promises to shine as the striking force of North East United FC.

The former Sparta Prague forward will have the luxury of French magician Robert Pires behind him and that will amount to see a respectable tally of goals from his foot. He won a bag of trophies while playing for Sparta Prague and Croat Giants Dinamo Zagreb. The versatile attacker, who is yet to score for his country, will be a primary name in Zico’s tactics as his heading ability and sublime finishing can give FC Goa a sumptuous momentum,

The name Ivan Palacios is still famous in the minds of Racing Santander supporters. His last minute goal earned them their long-sought Europa League chances in 2007. The Santander boy later went on to play for Elche, Cartagena and left sing of talent everywhere. Standing just at 25 years, he is amongst the paltry number of young lot of foreigners who are going to feature in ISL. Nevertheless, he will have an experience of a lifetime while playing alongside David Trezeguet and this might help his career a lot as he should play a pivotal role in Pune City’s attacking agenda.