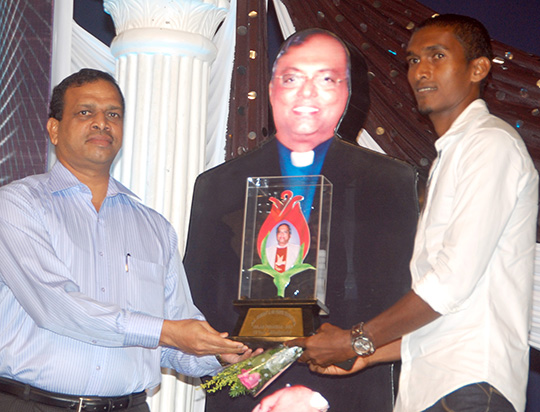 Churchill Brothers Goa central midfielder Lenny Rodrigues has won his third individual award in two months as he was adjudged the ‘Best Sportsperson’ at the Gulab Awards 2013, which was organised by Fr. Freddy J Da Costa Memorial Trust at the Ravindra Bhavan, Margao on Saturday.

These awards are presented to the meritorious winners for excellence in the Konkani tiatr, literary, social and sports fields. The function commemorated the 60th birth anniversary of late Fr Freddy J Da Costa, the Founder-Editor of the Konkani Monthly magazine Gulab, who had also instituted these awards.

In May, Lenny won the Indian Player of the Year Award at the FPAI Awards in Mumbai and last month he won the Best Midfielder accolade of the 2012-13 I-League. Lenny has become indispensable for club and country and was instrumental in Churchill Brothers Goa’s second I-League title success last season.

But the recognition at the prestigious ‘Gulab Awards’ has special significance for him.

“This is a proud moment for me as my hard work has been recognized at the prestigious Gulab Awards. This will motivate me to work even harder from now on and I hope my success will also inspire Goan youth in every aspect of life,” Lenny stated.

The last footballer to be rewarded at the ‘Gulab Awards’ was former India captain Climax Lawrence in 2008.