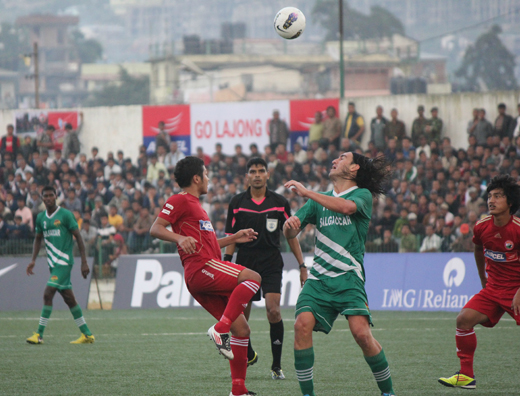 SHILLONG: Shillong Lajong FC came from behind to snatch away a point from Salgaocar FC after they held the Goan giants to a 1-1 draw at JN Sports Complex on Friday.

It was the tourists who dominated the first half of the game, but were little unlucky to open their account in the first half. In the fifth minute of the game a measured flag kick of Rocus Lamare which was headed by Angel Guirado was well punched by custodian Lalthuammawia Ralte for a corner. Had the ball been an inch here and there the story would have been different.

In the 29th minute Lajong came close scoring when Boithang Haokip took a wild shot after Sushil Kumar Singh set him up brilliantly. Haokip had all the time under the sun but he took a wild- shot which went flying miles away from the target.

The score card was reading 0-0 at the end of the first half.

In the 52nd minute of the game referee Pranjal Banerji caught L. Lallawmzuala about 45 yards from the woodwork. A perfect free kick shot by Angel Guirado which gave no room for the home side goalkeeper to go for the ball.

But their joy was shattered a minute later when Ebi Theopillus Sukore made no mistake to convert a cross volley Sushil Kumar Singh at the back of the net.