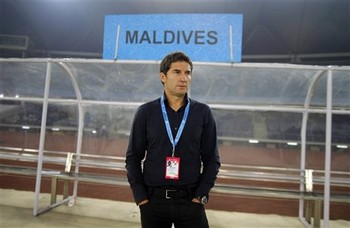 NEW DELHI: Put him to save a penalty and he is concentration personified. But Subrata Pal can’t bear the tension of watching his own team taking a penalty. With Maldives’ defender Mohamed Sifan handling a Syed Rahim Nabi centre in the 45th, the referee pointed to the spot.

As Captain Sunil Chhetri put the ball on the spot and then ran to take the spotkick, everyone in the Stadium had their eyes fixed on the Maldives goal – except Pal. He preferred to turn his back and rely on the cheer of the crowd. The very next second, he jumped up, more than anyone in the Stadium as the crowd roared. Chhetri by then, had sent Maldives goalkeeper Mohamed Imran the wrong way and was celebrating with his other teammates.

Chhetri scored another in the second half – off a diving header (70th) as India, cheered on by a vociferous crowd breezed past Maldives 3-0 in their second match of the Nehru Cup, thus moving onto 6 points. Syed Rahim Nabi completed the rout heading in the second goal in the 53rd minute.

Wim Koevermans’s wards displayed some delightful football on the pitch, playing in the new style of theirs with relative ease than their previous outing. Their passing was clear, crossing much more accurate and after it kicked-off, it was just a matter of time before they would take the lead. The visitors had a tough time trying to thwart the flankers, especially Nabi, who was darting down the left flank every now and then.

One such run had three defenders trying to stop him. He crossed and before Chhetri could meet his delivery, the ball struck the hand of Mohammed Sifan. The referee pointed towards the dreaded spot. Chhetri stepped up amidst deafening cheers. The India captain, who scored around the same time in the last match, did not disappoint his adulates.

Change of ends brought more misery for Maldives who came into the match high on confidence after their win against Nepal. Nabi this time got his name in the scoresheet heading home from a Clifford flag kick in the 53rd minute.

Chhetri also stayed unlucky when he hit the woodwork after getting past the goalkeeper. But it didn’t matter.

Man of the Match: Sunil Chhetri