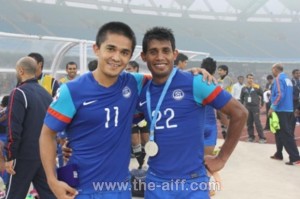 The AFC Challenge Cup 2012 is less than 24 hours away but there is no hint of it being telecast in the Indian territory. If you are a foreigner, you will be surprised and if you are an Indian football fan, probably you have gotten used to the idea of not being able to see your national football team on TV.

India is probably the only participating nation where the match telecast/broadcast/streaming is doubtful. Here is the list of TV channels in those nations:

Tajikistan and Turkmenistan – Don’t bother, they do not even have a website!

Okay you got me there. India is perhaps not the only country without telecast. But come on! Are you really going to give that argument?

We are an ’emerging superpower’ after all! And damn we cannot even get TV feeds from our friendly neighbourhood?

I am not going to blame Ten Action, Ten Sports, ESPN or Star Sports. They are here to do business above all. And if something doesn’t sell why trade it? But what happened to all the arguments of ‘national interest’ that Doordarshan (DD) had put forward to steal a share of the cricket pie? Showing cricket matches are public service acts and showing a developing sports like football is not? Looks like ‘national interest’ has boiled down to ‘personal interest’.

I would give DD an excuse. They might not even know that something like AFC Challenge Cup is happening. Quite possible. So will the AIFF please stand up and say hello to DD? What is the use of having a powerful central minister at helm if he can’t pull a few strings behind the scenes?

How to watch the matches?

I am seriously hoping there are live streaming links available. If there are any the people on Indian Football Forum will find and post them there. Or for the least we will have live match updates and discussions.

Probably AIFF will manage to get someone to show all the India matches, if not at least probably the semi-finals and the final. But the question that the AIFF should be asking themselves is- How long?