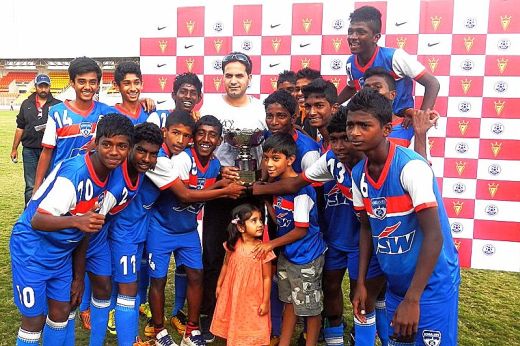 The Bengaluru FC under-15s were crowned champions of the south-west zone of the Manchester United Premier Cup – India leg – with a 1-0 defeat of Dempo SC at the Balewadi Stadium, in Pune, on Wednesday. Pradeep R smashed home a scorching strike in the 32nd minute to hand the BFC colts zonal honours.

Opting for a cautious approach to the final, Dempo crowded their half, frustrating Bengaluru FC attempts that were being broken down frequently. But it took a moment of magic from Pradeep to seal an important win for BFC. The lead in hand, Bengaluru were content playing the possession game in an attempt to kill the encounter.

However, Bengaluru’s biggest test will be on Friday when they take on Mohammedan Sporting in the semis of the All India final. Dempo and BMSC Manipur will battle it out in the second semifinal.

“We are delighted that all the hard work over the months is paying off. The boys are enjoying their football and are following instructions to the tee. However, they must realize that the job is only half done. There is another Cup at stake,” said coach Saksham Kakkar.

Earlier in the day, Bengaluru FC needed a 22nd minute strike from Shelton Paul to see off DFA Ernakulum. BFC play their semifinal at the Balewadi Stadium at 9 am.