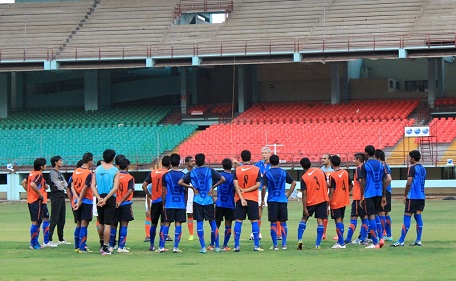 “We have some new faces in the squad. All of them please step forward,” Wim Koevermans pronounced in the team meeting. Sandip Nandy, Lalkamal Bhowmick, Arata Izumi, Shouvik Ghosh, CK Vineet and Gurjinder Kumar obeyed the orders. And then, they were asked to sing the National Anthem. They obeyed orders again, even Arata. The rest stood up from their chairs.

“You belong to the National Team. The pride and passion of representing your country is what you have to feel for yourselves,” Koevermans added. “But at the same time, you need to conceive the tempo of International Football. It’s played at very high intensity,” Koevermans, who Coached India to triumph in the Nehru Cup, added.

Every day, early morning when most, prefer to snooze under the blankets, Koevermans, has sweat all over him. On his return from the gym, he’s omnipresent. He checks every minute detail, queries about rest taken by the players, their massage, niggles (if any), sips a coffee or two and then, scribbles on his notepad. In between, he walks up to his tactic board, moves his magnets and comes back to have a sip at the coffee.

“Palestine look a very competent side,” he maintains during the pre-match Press Conference. “Nine of their players who had done duty in the West Asia Cup in December 2012 are in the squad. We have watched them in videos and they are a powerful side.”

“It will be an interesting match for sure.”

Jamal Mahmoud Abed Mahmoud Pass, the Palestine Coach, smiles. “India are a capable side. We are happy to be in India,” he maintains. “It will be an interesting match,” he complements Koevermans.

Thirty minutes later, Koevermans is back to his drawing board again. “Don’t switch off during training. We were together for five weeks for the Nehru Cup. This time, you need to peak within two practice sessions. That’s the challenge of an International Friendly,” he urged to his players.


“Teamwork is very important. Help each other. The transition to defend stays most significant. It’s not only about what you do with the ball but what you do when you don’t have it,” he stresses. “Defending is helping each other.” The boys listen and then nod.

You see the boys sitting together and discussing it among themselves. There’s Captain Sunil Chhetri, current AIFF Player-of-the-Year Syed Rahim Nabi, Mehtab Hossain, Gouramangi Singh, Clifford Miranda, amongst others.

“It’s an important match for us,” Gouramangi echoes. “We need to be on our toes,” Subrata adds. “There’s isn’t room for any slip-ups.”
“No challenge on the ground is easy. It’s up to the team to rise to the occasion; we have to. We have done it in the past. The Coach has enlightened us on a few points and we are ready,” Mehtab Hossain says in one breath.

The entire squad, including Koevermans himself, stays aware of the football tradition of the State. “I’ve heard about IM Vijayan and Joe Paul Ancheri,” Koevermans quips. And even as local lad CK Vineet impresses all in the strenuous practice sessions, Koevermans expects a full House at the Jawaharlal Nehru Stadium in Kochi on Wednesday.

The kick-off is at 6.30pm and the match will be telecast live on Ten Action.