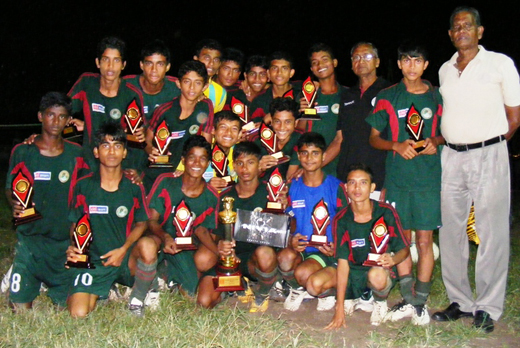 The future of Indian football is indeed bright and so is the future of football in the beautiful state of Himachal Pradesh. The 1st ONGC Himachal Pradesh Football Festival concluded today with Mohun Bagan U-14 team lifting the trophy in the presence of chief guest Dr. Rajiv Bindal, Gen. Secy., State BJP.

The final played under floodlights at Nahan Chaugan had capacity crowds watching the fierce battle between Mohun Bagan and Sambalpur Football Academy where the Bengal side triumphed by 2-0 goals. With both the teams matching each other in terms of skills and strength, the competition was fierce with both sides playing an attacking game. Satyajit Roy strikes the first blood for the young Mariners in the 30th minute to give them an edge in the break.

Change of end saw the game getting more physical with Sambalpur pushing hard for an equalizer. In the process, the Odisha side had one of its player sent off to reduce them to 10 men. Taking advantage of the gap in left flank, Deepankar ran across too defenders and sent in a perfect cross for Ferozuddin  Mollah to slot in the second goal in the 67th minute.

Prior to the kick-off, the chief guest, in his speech encourage the kids of Himachal Pradesh to take interest in the game of football as it help the children to understand the importance of hard work and team spirit. Mr. Bindal also said, “Himachal has taken giant strides in improving its football in a very short span of time. But the good work has to be continued as the mission has not been achieved yet. The road ahead is still very long.” He also added, “The Govt. is also doing everything possible to make Himachal a strong sporting state with the calibre to produce international athletes of all kinds.” To encourage people, he also reminded them about the 3 per cent quota for sports persons in Govt. jobs.

Early in the evening, famous juggler, Uttam Das treated Nahan with a rare sight of football magic when he performed his records football antics. He rode around Nahan on a bike, balancing a football over his head. Then he showed some of his juggling skills to mesmerize the people of Nahan.